Coast six chasing a place in the Senate: SCD 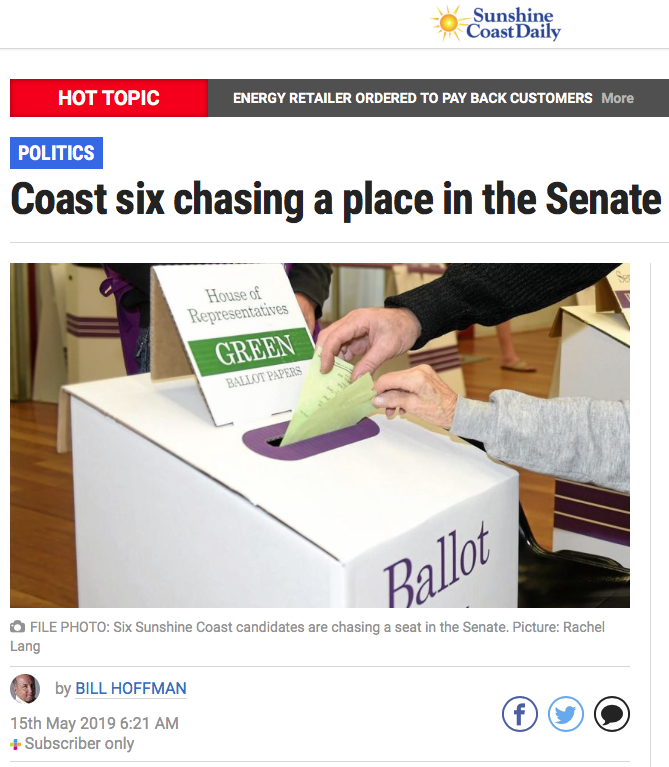 15 May Coast six chasing a place in the Senate: SCD

Posted at 14:46h in News, News Articles by Tony Moore

FROM the disendorsed One Nation candidate Steve Dickson through to a father and daughter team listed on the ballot paper as Group X, the Sunshine Coast was well represented on the Senate ballot paper for the Federal Election on Saturday.

In total there are 83 nominations for six vacant senate seats in Queensland.

Occupying the unwinnable sixth place on the Labor ticket is Christina Warry, the partner of two-time Labor candidate for Glass House Brent Hampstead.

Labor will be hoping to secure at best two Senate seats at this election, leaving Ms Warry well short of being able to attract the necessary 14.3 per cent of the vote to secure a quota.

Tony Moore, a regular election candidate, has been joined by his daughter Cartia as above-the-line candidates where 97 per cent of electors vote, listed as Group X on the white Senate ballot paper.

He’s bitter that because he and his daughter weren’t endorsed as part of a registered political party, they have been dumped in a box with no identifying names. Mr Moore claimed people had told him they thought there had been a misprint.

It will be his sixth election campaign and comes after he ran as a below the line listing in 2016.

A cabinetmaker by trade, Mr Moore has various tertiary qualifications, including an MBA and a Masters in Politics and Public Policy.

Not quite as far down the alphabet but with equally slim chances is Sue Mureau who is listed number at number two behind child safety advocate Hetty Johnston in Group R.

Ms Mureau ran for Glass House at the last state election and has previously headed the Queensland branch of the Australian Workers Party.

The self-employed contractor was also an active advocate against domestic violence and for victims.

Kris Bullen contested Fairfax at the 2016 federal election on an online democracy platform advocating a direct vote on every major policy initiative.

Mr Dickson, highly visible in 2017 when he attempted futilely to hold on to the state seat of Buderim after switching from the LNP to One Nation in January of that year, has been nowhere to be seen.

The latest Newspoll has Labor on track to win the election on the back of a 1.3 per cent swing delivering it 77 seats nationally to the Coalition’s 68 with a further three seats going to independents, and one each to the Greens, Centre Alliance and Katter Australia Party.

Sportsbet has Labor as firm favourite at $1.15 on the back of solid support from punters during the past fortnight.

The Coalition, in contrast, has drifted out to $5.50 to form a sworn-in government.

The bookies were tipping Bill Shorten to form government with 82 seats to the Coalition’s 63.