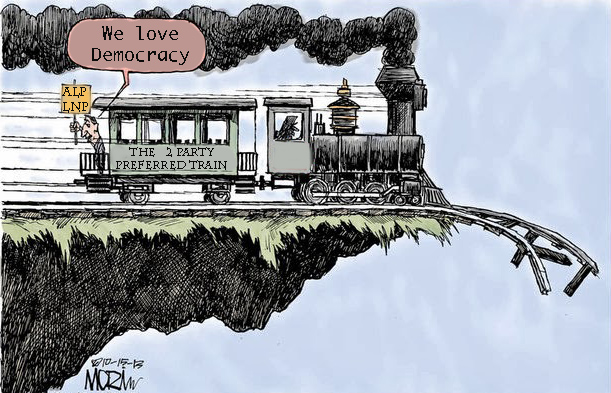 Tony Moore has issued a strong rebuke over what he believes are numerous fear-styled emails being sent by the LNP to members and supporters asking them to tell their friends and family not to vote for independents, minor or Christian parties.

In addition they have launched aggressive and misleading negative-politics TV and youtube campaigns, some featuring Australian Christian Lobby aligned, John Anderson AO (Former Deputy Prime Minister) in the hope to get the fear-message out in time for Election Day.

The content claims that 36 Queensland parties, mostly unknown, have engaged in “backroom deals that seek to funnel votes [away from LNP] into a Senate spot” said Anderson.

But Tony Moore, has labelled the LNP and Mr Anderson’s message as “lacking integrity and deceptive – designed intentionally to mislead trusting voters by using a Nazi-styled fear and half truth approach to evoke a fear of voting for anything other than LNP”

“The LNP hope fear will keep voters in their pocket”

Mr Moore said “The fact is, Anderson and the LNP, either don’t understand Senate peferencing at all, or they have intentionally hid the other 95% of the truth from the public in order to manipulate the people’s vote for self gain. It’s unAustralian and undemocratic”.

“Their actions would be like me publicising that A vote for LNP is a vote for the Sex Party, the Greens, the Socialist Equality Party and One Nation. All of which is 100% true by the way, but it’s misleading when I leave out the context and order of the other 78 Senate candidates”.

“The facts can all be seen for themselves at the AEC website, http://www.aec.gov.au/election/qld/qvt.htm but the LNP take advantage of the people who blindly trust whatever the LNP feed them. Many will not be bothered to look any further than an LNP how to vote card, or hear the truth” says Mr Moore.

“It’s time to spring-clean the House of Representatives. The solution for voters is to choose your own preferences and vote this election day with your eyes wide open”